We'll walk you through some of the JavaScript basics

Whether you're just learning how to code, an expert brushing up on the basics, or a founder trying to communicate better with a technical team, we're diving into declaring and using variables in JavaScript – courtesy of the Remedy engineering team.

We'll walk through Scope, Hoisting, Bindings, Temporal Dead Zones, and Functional Declarations vs Class Declarations. Keep an eye out for resources throughout the piece in case you want to explore any of the topics further.

"Scopes are like buckets, and variables are like marbles you put into those buckets." — You Don’t Know JS Yet

A scope is a set of rules that controls how references to variables work. They're all about the visibility of variables in your code and control which variable can be used where. Each scope can “look out” into the scope around it. Scopes are static and contain a fixed set of variables available at a given moment or location.

Global Scope is the scope that contains, and is visible in, all other scopes.

Block scope in JavaScript is created with curved brackets:

JavaScript Hoisting refers to when an interpreter moves the declaration of functions, variables, or classes to the top of their scope, prior to execution of the code.

Hoisting is a feature that is based on two ‘phases’ of code execution:

JavaScript allocates memory for all variables and functions defined in the program before execution, but only hoists declarations, not initializations.

To catch and hold values, JavaScript provides a binding, or variable.

In this sentence the keyword let indicates that we are going to define a binding. It is followed by the name of the binding and, if we want to immediately give it a value, by = operator and an expression. This binding is called

and is used to take hold of the:

After a binding has been defined, its name can be used as an expression. If we define a binding without giving it a value, there is nothing to grab, so we get the value undefined. JavaScript systems always put a number of useful standard bindings into your environment, like:

Each binding has a scope – the part of the code in which the binding is visible. A variable or binding can only be used in its scope and/or any nested scope.

For bindings defined outside of any function or block, the scope is the whole program — you can refer to these global bindings wherever you want.

However, bindings created for specific function parameters or declared inside a function can be referenced only in that function, so they are known as local bindings.

for variable declaration, but ECMAScript 6 (ES6/ES2015) introduced the two keywords:

that support the declaration of block scope local variables. This means variables will be confined to the scope of the block they are defined in, such as an if statement or for loop, and will not be accessible outside of the opening and closing curly braces of the block.

This is contrary to:

declarations, which are accessible outside of the blocks they are defined in.

The difference between the two variables

is that a const declaration is, as the name implies, constant — a read-only reference to a value. This does not mean the value is immutable, just that the variable identifier cannot be reassigned.

This can cause problems, especially if variables are used in the global scope.

Temporal Dead Zone (TDZ) is the term used to describe the state where variables are unreachable. They are in scope, but they aren’t declared. Variables declared by either

have TDZs. Variables declared with both

have block scope. When a variable is declared with block scope, it does NOT have the same variable hoisting as variables that are created in function scope.

Block scope variables are not hoisted to the top of the scope and therefore cannot be accessed until they are declared. This means variables that are created with block scope are subject to the Temporal Dead Zone (TDZ).

If a variable is accessed inside the Temporal Dead Zone, a runtime error will be thrown. This is important because it allows our code to be built more robustly with fewer semantic errors arising from variable declaration.

Let’s look at an example: 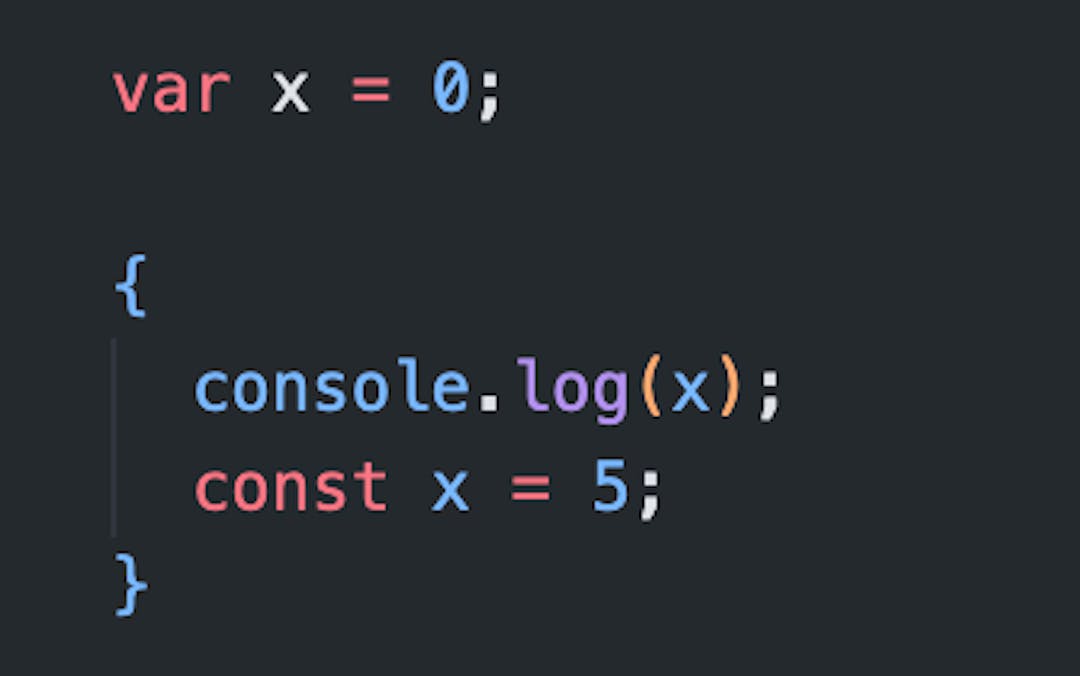 If we run this code we will get a

Why? Because when we declare the variable

we create TDZ for

that we use in

You can find more examples here.

Let’s look at an example of a global object:

declarations. The environments for various variables form the following chain:

JavaScript can feel daunting but breaking it down to the basics – like scope, bindings, and hoisting – helps. We reviewed the relationship among the three and how

worked across them. After mastering these, we broadened our scope, looking at global objects, Temporal Dead Zones (TDZ), function declarations, and class declarations. You're now brushed up on the basics and ready to get started.

We’d love to hear from you!

Want to speak with a member of our team? Reach out with your questions and comments.